" My top pick for the best new book of 2014 is Lorrie Sprecher's Pissing In A River."

From Publishers Weekly:
An ex-pat punk enthusiast contends with mental illness, homophobia, and post-9/11 politics in this third novel from the author of Sister Safety Pin and Anxiety Attack. Ever since she first heard them—while listening to Heart's debut album—Amanda has been in pursuit of the voices in her head, a British duo whose presence has helped her through the worst moments of her obsessive-compulsive disorder. Restless, repulsed by American politics, and vaguely hopeful about finding the voices, Amanda moves to London, where she meets Nick and Melissa while saving the former from a would-be rapist. The trio become fast friends, and Amanda's fledgling mental health is soon threatened by a new complication: her "will-shattering, soul-crunching" love for Melissa, who is both straight and unaware of Amanda's complicated past. Spanning decades of controversial U.S. policy (Amanda is an AIDS activist in the ‘80s, and an opponent of the Patriot Act and Guantanamo Bay in the aughts), the novel is as much a manifesto as a romance, as well as an homage to punk music's legacy of challenging the status quo. "These songs were the way we communicated and understood each other," explains Amanda, who quotes song lyrics incessantly. "We lived our lives according to how we felt when we listened to them."
​

From Kirkus Review:
An American expat haunts the streets of London, dancing to the beat of a head full of bad wiring.

Please, please, please let her get what she wants: After mining the D.C. punk scene in her debut novel 20 years ago, this follow-up by Sprecher (Sister Safety Pin, 1994, etc.) revisits the post-punk/Britpop era of 1990s London with such detail and accuracy that readers may be able to hear chords hanging in the air. When we first meet our heroine, American teenager Amanda, she’s in a sorry state. Humming with post-suicidal anxiety and obsessive-compulsive disorder and deadened by a cocktail of psychotropic drugs, she hallucinates two British women: a stunning brunette named Melissa and a younger, punky girl. Determined to seek out the source of her visions, she books an adventurous study-abroad trip in London, where she starts to come out of her shell. After steadfastly earning a Ph.D. in English literature in America, the now 30-something out-and-proud lesbian throws her guitar on her back and returns to London as a busker. One awful night, she interrupts a rape in progress and saves Nick, a cocky Cockney woman with damage similar to Amanda’s. They seek shelter with Nick’s doctor friend, Melissa, with whom Amanda falls instantly, rapturously in love. As the potential couple tiptoes toward each other, Amanda continues to rock the Tube, engage with London’s dangerous activist movements, rail against injustice and struggle with mental health issues. “My brain spat out intrusive thoughts faster than I could neutralize them,” she says at one particularly bad moment. “I would have given just about anything if I could have unscrewed my head and taken if off for a few minutes.” It’s a wild ride buoyed by the voice of its screwed-up, kick-ass narrator and scored by the likes of Nirvana, The Clash, Patti Smith and even Heart. Dig the E.P. on the author’s website to hear Amanda’s tunes.

An honest and genuine DIY punk-rock lesbian love story from back in the day.

Amanda moves to London with nothing but her guitar and her collection of punk music as the soundtrack to her every step. With the company of a few friendly voices in her head, she looks for—and finds—a best friend and new lover. She forms a band, Lesbian Raincoat, and completely rewrites the story of her life.

In this irreverently funny yet profound novel, Amanda risks deportation, recalls the fervor of AIDS activism in the US, connects to the class struggle of punk, and finds redemption in love. But she also must confront her own mental illness, her lover's rape, and the violence of post-9/11 politics. Pissing in a River captures the glee and turbulence of surviving the cacophony of modern life. 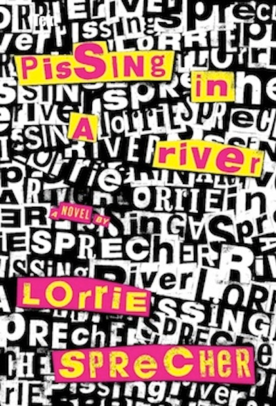